In my work with Postgres and other databases, I’ve often heard the statement “stored procedures (i.e., functions in Postgres) are faster than queries.”

To be precise, “stored procedure” refers to a Postgres function, defined using the create function command, and executed by passing a string like select * from some_function(...) from the client to the database server. “Query” refers to a standard SQL query (e.g., select * from some_table where id = 10), defined by the client, and executed by passing the literal query string from the client to the database server.

However, that’s not really what I’m after. I’m more interesting in answering this question:

In this post, I take a first pass at answering this question based on a very simple benchmark.

All the benchmarking code is available in my site-projects repo, but here’s a quick summary.

I created a small blog-style database with two tables for posts and comments.

For the comparison, I wrote a function and query to count the number of comments for a given post_uuid:

To execute the functions and queries, I wrote a Python script that does the following:

I incorporated this Python script in a bash script that does the following:

I ran Postgres 15.1.0 in a Docker container on my 2018 Intel i7 Mac Mini. I used a combination of docker-compose and Postgres configurations to limit the resources: 1 CPU, 8GB memory reservation, 8GB memory limit, and shared_buffers set to 4096MB. I ran the benchmarking script on the same Mac Mini to eliminate variability from a network connection.

To analyze the execution time, I simply used the time command.

To analyze database resource usage, I wrote a simple bash script that polls the docker stats command and exports the following metrics:

Why would the function be faster?

A few possible reasons come to mind for me:

We’ll see if any of these hold up.

The execution times for 100,000 iterations are about 1 minute and 35 seconds for both the function and the query, or about 1050 iterations per second.

The container metrics are plotted below: 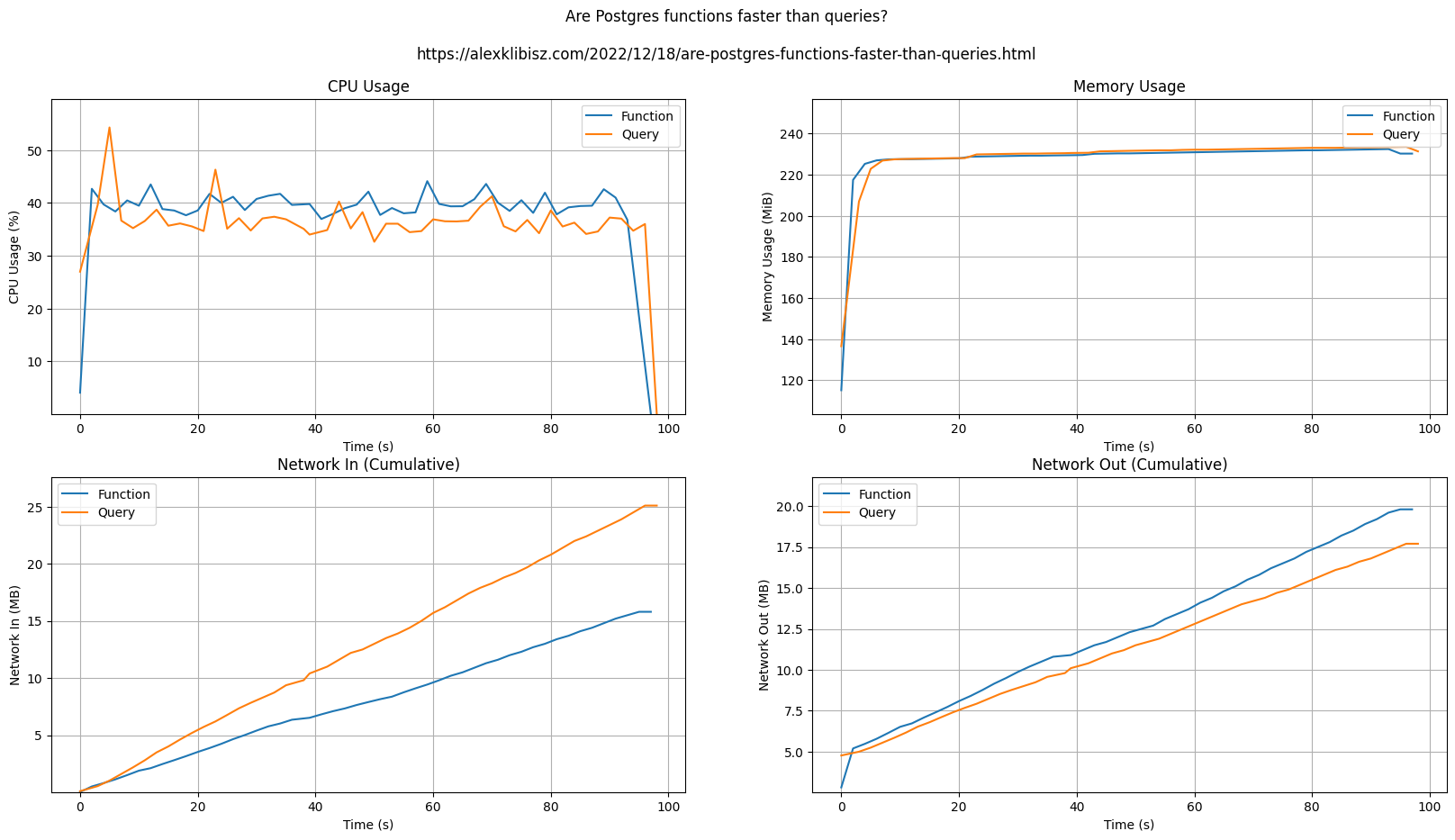 The query seems to use slightly less CPU compared to the function. I’m not sure why this would be the case, but it happens consistently.

Network input is consistently higher for the query. This makes sense, as we’re sending a larger string over the network to the database.

Network output is consistently very slightly higher for the function. I’m not sure why this would be the case, but it happens consistently.

I ran this several times and also swapped the order (function first, then query, and vice-versa). The only difference I observed was the execution times moving a couple seconds in either direction. Otherwise, everything remains as described above.

Based on these results, for the simple select query that I benchmarked, functions are neither obviously better nor worse than queries.

Note, this is by no means a definitive conclusion! I can think of several scenarios where I would still consider both a function and a query. But, for a simple select query like the one I benchmarked, I will probably reach for a query over a function.